(We proudly welcome Shri ShriRam Ayyangar on e-abhivyakti.  Shri Shri Ram Ayyangar is a retired banker, Social Worker, blogger since 2009, Limca Book of Record holder and the great satirist. Apart from all these activities I see him as a great satirist, who silently lives in Bangalore with his golden memories of history created by publishing classical magazine “Vyangyam” with his two friends Late Ramesh Sharma Nishikar and Shri Mahesh Shukla in early eighties.  Shri Ayyangar writes his blog that is all about his satire writing, political & Social comments. A peak in to day to day life of a common man, his travails, experiences and expectations from the Government and local authorities.  Today,  we reproduce his most memorable and for us a historical blog written on January 6, 2011)

He may be reached through his blog  >>> Ayyangar’s Blog- “VYANGYAM”

You must have observed a change in template and title of my blog. Now a word “Vyangyam’ has been suffixed. This first post in 2011 is dedicated to “Vyangyam”, a quarterly little magazine (Laghu Patrika) in Hindi fully devoted to Satire writing and edited by me along with two other like minded writer friends Ramesh Sharma ‘Nishikar’ and Mahesh Shukla from Jabalpur.

‘Vyangya’ in Hindi means Satire, a word very close to my heart as I have been writing satires right from my college days first in Hindi and later in English. Often readers mistake satire to humor but we as a satirist draw a line between the two. While humour is purely for laugh and entertainment, satire is serious thought process with a touch of humour which makes the reader aware of the anomalies in the society in and around, socially & politically.

Going back in time during 70s & 80s, satires were published as filler or under humor section of any Hindi magazine without any regularity. There was not a single full fledged satire magazine in Hindi except ‘Rang chakallas’ from Bombay edited by Mr. Chetan but that too was a mix of humour and satire. Madhya Pradesh was a home for top satirists of those days namely Sri Hari Shankar Parsai and Jabalpur and Sri Sharad Joshi in Bhopal. They were the pillars and inspiration to numerous young writers like me and others.

We three friends decided to fill the gap and idea to start a magazine on satire was born. All the three of us were in clerical grade that time and with no financial backing and any experience in canvassing or marketing decided to go ahead with our plan because of our strong urge and passion. That was the time our country was undergoing a dark period of history called ‘Emergency’ in 1976. There was total censorship on media; right to express was oppressed, opposition leaders were either in jail or underground and those in power were crawling. Satire and humour was first casualty in emergency.  Satirical and humorous English Magazine like ‘Shankar’s Weekly’ was forced to close down because it refused to kneel down. Under the clouds of emergency, our magazine was conceived and we brought out the first issue in January 1977 with 500 copies of the magazine called “Vyangyam” costing Rs.2/-. 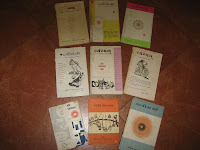 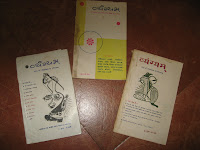 During its entire period of publication, we three friends were the editors, proof readers, layout designers, office boy, Chai wallah, dispatchers and hawkers, all in one! During 77-78, eight issues of the quarterly magazine were regularly published. The magazine received full support from all the famous and not so famous writers by way of free contribution of articles but in absence of sustained financial support from any quarter, the magazine started sign of fatigue and illness by the time we published its 10th issue. Despite its low cost, the magazine unfortunately could not pick up sales or subscription. To mobilize funds we also published two books and a novel but in vain and soon we were forced to discontinue the magazine in 1979.”Vyangyam” could not be revived again. The closure of the magazine also showed us our many friend writers and well-wishers in their true colors, who drifted away quietly.

Back to 2011, after 31 years I am rededicating this blog of mine to ‘Vyangyam’ by suffixing it to my blog title. Let the flag and the flame of spirit fly high.